I’ve asked dozens of Haitians the question, “What do you think Haiti needs most?”  Nine times out of ten their answer is, “Better education.”  In a country where only 50% of the population is literate and less than 20% of school-aged children will complete 6th grade, it is easy to sympathize with this answer.  How did Haitian education get to this point?

In Haiti, government-subsidized schools have an almost mythical reputation. They do exist, but are so sparse that most children will never step foot inside one.  Government-funded schools (or “public schools” as we would describe them) account for less than 10% of education in Haiti, leaving a massive void to be filled.

The majority of education is provided through private schools.  As in the States, Haitian private schools rely wholly on revenue sources other than the government, primarily tuition fees being paid by the parents of attending students.  However, the similarities with private American prep schools end there.  In Haiti, many private schools struggle.  Even at discounted-tuition rates, school fees are often a major financial burden for families.

Imagine a Haitian farming family with five children.  With limited income and a large family, they can only afford to send one child to school per year.   How do they decide which of their children goes?  Maybe this year the eldest gets to go.  Next year maybe the second child can go, or maybe their son gets to go, because he is a boy.  Maybe the parents pick one child and fund this child’s education over their other children, assuming that if he makes it, he can provide for the family in the future.   What happens when a hurricane rolls in and wipes out the crops?  If (when) that occurs, it is likely all their child will skip a year or two to help work the field until the family can recover.  These challenges create a less than ideal learning situation and force many students to repeat grades ultimately resulting in heart wrenching statistics like, “Less than 20% of children will graduate from the 6th grade.”

For the past five years Pastor Bertin Cloitaire has faithfully served 58 children in the small village of La Hatte, Haiti.  Receiving no fame or wealth and little recognition, he and his wife have invested themselves fully in the lives of the children in their care.   The children’s daily routine includes: chores, bible reading, prayer, music and of course, school.  Consistency is often a game-changer in the lives of orphaned and abandoned children by providing stability they may not have formerly known.

This week I received an especially encouraging email from GO Haiti’s Orphan Care Manager, Pierre.  As part of his monthly duties, Pierre performs a series of assessments and provides reports for every village.

Among numerous updates concerning La Hatte was the following sentence, “100% of the children passed the government exams” meaning they all qualified to go to the next grade. At GO Project, we celebrate this as a huge win!  These kids have a long way to go, but one thing is certain, stability and consistency matters…it is life changing.

This week, as the children of La Hatte prepare for the start of a new, challenging school year, we lift up prayers of thanks for Madame and Pastor Coiltaire for their steadfast commitment to a 58 sibling family in La Hatte….and for the children who are making the most of their God-given opportunities!

One must tread lightly when quoting Joseph Stalin.  The untold and largely unknown atrocities of the civil clampdown on […]

Starting to build in Sudan & Ethiopia

The GO Africa team and our church partners have been working hard in Sudan and Ethiopia. We recently received […]

Mike Fox and I have a small team arriving now in this East Africa trek.  Mike Helmuth is with […]

The hands and feet

From Rose, (GO Africa Orphan Care Manager)
My trip to Sudan this particular time has been a special one and […] 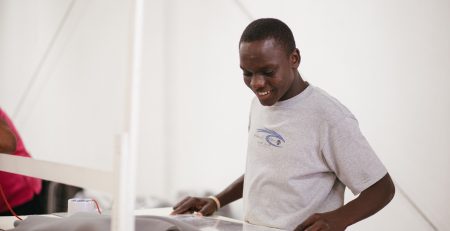 Thank you for dreaming with us.
Two years ago, Joe Knittig—GOEX and GO Project CEO—stood on the floor of an […]

by Jenni (GO Fellow)
Many communities in Haiti, like Desire, are in desperate need of clean and affordable water resources. […]