A Real Estate Mogul Wants to Build a Wall…

A Real Estate Mogul Wants to Build a Wall…

…but we’re not talking about The Donald. We’re talking about a couple who wants to build a retaining wall to keep children in; that is, in homes that are safe from a chronically-flooded river.

Our friends aren’t running for President, but they are reviewing their assets, wondering how they might care for the orphan. They identified their commercial lot in Independence, MO, and asked, “Why not sell it and use the proceeds to care for the orphan?” So they are!

But you thought this was about building a wall? It is: a wall designed to preserve.

Miles down a rural, dirt road, one of GO Project’s first Haitian partners, Cassamajor and the 172 children in their care, sit in a valley created by mountains rising on both sides. During heavy rain, this picturesque location changes quickly, as water flows from the mountains and a dry bed becomes a raging river.

The rainy-season has taken a toll, as the erosion has brought the river bank to within three paces of the boys’ home. Enter the common Haitian retaining wall. Built correctly, a retaining wall will secure the future of the building containing homes for more than 80 boys. It’s the top construction need in our international ministry. An investment of $30,000 ultimately saves the equivalent of eight homes.

Looking for an investment? How about a commercial lot in Independence where the proceeds from the sale of this property will be invested in the lives of children at Cassamajor? It’s this kind of investment that will make Cassamajor great again. It’s the kind of campaign we can all get behind!

by Trace Thurlby from Northern Uganda
Today’s high highs and low lows fill my head and heart.
This morning Jacquelyn and […]

We are heading to Haiti in a couple of days. Seventeen of us are traveling together on this 4 […]

Whether one is losing weight, writing a book, or caring for children, progress is rarely linear. Many days may […] 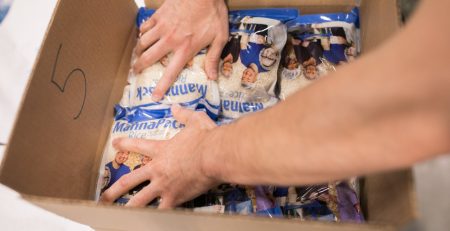 On May 12, more than 800 volunteers devoted their Saturday morning to feed kids! With music and a pancake […]