Many communities in Haiti, like Desire, are in desperate need of clean and affordable water resources. The problem is not that water is in short supply; rather the lack of vegetation from deforestation has created a precarious environment for clean water to exist. If you were to look at an aerial photograph of the island, you would see a

stark contrast between Haiti and the Dominican Republic, the first being predominantly brown and arid while the other is lush and green. The increased demand for charcoal as a major fuel source, coupled with poor agricultural practices, left the soil in Haiti void of valuable plant roots that would normally stabilize the surface and make it difficult to dig wells with lasting effects. Unpredictable movements in the soil often deteriorate or contaminate existing wells and, as was the case for Desire, collapse potential resources from the first attempt to dig.

Until a few days ago, the community of Desire was in possession of just one well located at the bottom of a nearby riverbed. Besides being a difficult walk down a steep hill and over mounds of river rock, the town’s well was severely contaminated and unpredictable. At one point, the resource actually dried up completely, leaving Desire’s entire community without water. When word of this got around, everyone began praying for a solution. Soon water was found trickling from the side of the mountain, where there had not been water before. While it wasn’t enough to supply the area for washing, cooking, and drinking combined, it sustained the people of Desire for a time. Meanwhile Pastor Jeannot, Desire’s pastor and GO Project’s partner, did his best to avoid adding strain to the community by purchasing water in Gonaives each day, using his personal vehicle to make the 30 minute drive back to the village.

Surrounded by a myriad of prayers and funded by Faith Evangelical Free Church, there have been a total of three failed attempts to dig a new well in Desire. Each time the drill is pulled from the ground the soil collapses in around the hole, like sticking your fist into a bucket of sand and lifting it out again. Pastor Lavaud, who is in charge of drilling the well, recently purchased galvanized piping from the United States in a final attempt to support the first stages of this process. The pipe’s purpose was to encase the drill as it delved into the water table, forcing the soil back and stabilizing the hole as it was dug. Supported by metal and prayer, the drilling was finally successful this week, and we are praising the Lord for His work through our partners, their prayers, and the way He is drawing the village at Desire closer to its community through His providence.

Many reality and competitive TV shows are built on the very premise of providing feedback. If you’ve watched any […] 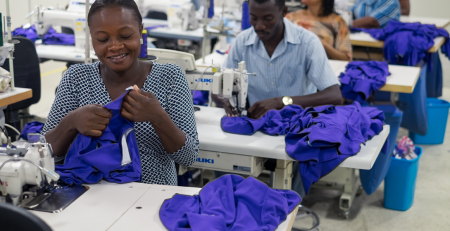 Meet Kalkedon. Every time you shop GOEX, all of the profit goes to fund projects set in motion to […]

Recently we received this update from Rose, GO Africa’s Facilitator for Local Church Partnerships:
Here’s an update on the borehole […]

Courage is Caring for Children

The reality is courage is what keeps children in families. And God isn’t stingy when we ask for courage. […]

Every now and then Mike Fox comes up with a good idea. This January’s Tour d Haiti is […]

This is a pic of the kids at Masaka saying their pledge of allegiance at the end-of-term program.
Kabale Uganda: […]

From the Field: Haiti Recovery

Haiti Update 3/12/10
Per our Phase 2 Action Plan, we are our launching our GO Fund to start businesses in […]