The Global Orphan Project began as a ministry to care for orphaned and abandoned children through the local church. Over the years, the ministry has become more than caring for children. We learned the importance of caring for the women who serve as Mamas, tending 24/7 to the children in our partners care. Along with the love of Christ and support from the local church, these women are raising very special families. This week, join us in celebrating and honoring Mothers around the world and help us in sharing their stories…

Seven – God breathed virtues that beget a life of their own. Each has a beautiful face.  They are the seven daughters of Bishop Johnson and his amazing wife, Christine.  Together, they are a family that embodies strength and promise in Northern Uganda.

Recently, it was our good fortune to have Bishop and Mama Christine visit GO Project. Mama Christine, as she is affectionately called and honored, has an amazing story that personifies the determination and relentless hard work of so many in sub-Saharan Africa. The oldest of four children, Christine grew up in a primitive, rural village near Gulu Towne. Twice a day before breakfast and supper, with siblings Joyce, Alice, and Simon, she would complete the daily chores of fetching water and firewood, digging and harvesting the garden, as well as helping wash and cook. Children from a young age are an integral contributing member of the family. They each learn responsibility. Life is simply hard work.

After completing primary school, as was tribal custom, Christine was sent to live with her maternal grandparents where she would help them. She was extremely fortunate, as they paid her fees to attend secondary school. However, after one term, war broke out. Life as Ugandans knew it turned upside down in horror unspeakable. One terrifying day, her younger brother Simon, at 12 years of age, was abducted by rebels of the Lord’s Resistance Army (LRA). It was 1996; she and her family would never hear from him or see him again. His “disappearance” haunted their lives.

Insidious, horrific, Hellish Joseph Kony would reign terror and wreak havoc in a million lives over the next twenty years.

A new life began for Christine. Leaving her rural home behind, she was sent for safety to the capital city of Kampala to live with her aunt and uncle. Her uncle was a lay reader in the parish church, and she would now be raised in a Christian home. She found solace in her extended family. They would provide her school fees, and she would care for their twins Evelyn and Jacob. Her days started at 5:00 am when she would bathe and ready them for school; then she would prepare breakfast of tea and bread before walking with them for an hour or so to school.  After school she would collect the twins and escort them another hour or so home, arriving by 6:00 pm to help cook dinner and complete evening chores. This was the rhythm of their day.

Christine’s new life was also growing larger. From rural village to amazing capital city, Kampala opened a whole new world to her. Amazing. Paved streets, modern transportation, running water, flushing toilets, and power-surging power. Overwhelming. Cacophonous sounds of the city. Industrial smells. Electric sights. These city people had knowledge and experience so different than hers. She drank it in and thirsted for more. She dreamed of education as a key to unlock her future. Her aunt and uncle had also taken in her younger siblings as the armed conflict continued ravaging in the north. Christine worked hard to graduate from secondary day school. Unfortunately, there was not enough money to make her dream of University come true.

Undeterred, she completed a nine month short course in culinary arts and began working at a restaurant. She continued to work hard, save money and contribute to her two sisters’ school fees.

As a lay minister, her uncle would often host traveling clergy. One fortuitous day, Reverend Johnson came to stay. He was serving at Christ Church Gulu and in the prison ministry there. He had grown up as a double orphan and had developed a deep empathy for the lost and least in society. His young wife had recently died, leaving him a widower with four young daughters to raise. It was not long after that first stay that Johnson returned and sought Christine to be his bride. They were married in 2001. She became an instant Mother to Hope, Faith, Charity and Grace. Yet, even as a new wife and mother, she continued to work and contributed to school fees for her younger sisters. Determined, she attended University classes in the evening. Her dream became a reality as she earned a Business and Accounting degree from Mukono University. In the meantime, their family grew to welcome three more daughters: Peace, Patience and Mercy.

In 2009, Rev. Canon Johnson was called to be Bishop of the Diocese of Northern Uganda (0verseeing 24 parishes), a top priestly position he never dreamed would be his, given he grew up as an orphan in Kiswata village. As a couple, he and Mama Christine dedicated themselves to love and holistically serve the Acholi people of Northern Uganda who have long suffered the atrocities of war.

Over a period of 20 years, nearly 1.7 million people were displaced by the LRA (Lord’s Resistance Army) and struggled to live in IDP camps (Internally Displaced Persons—refugees in their own country). Tens of thousands were either killed or maimed. Depression and subsequent suicide are rampant. A majority of those living in IDP camps never received any education and therefore now are functionally illiterate.

As the Bishop’s wife, Mama Christine is a proven model of industry. She is raising a family, serving with her husband in the diocese and works full time as an accountant and financial report analyst for the Uganda Human Rights Commission.  She travels once a month from Gulu to Kampala on business. While there she takes extra time to minister with The Mothers Union (MU), a women’s service league, that some have deemed the working backbone of the Church of Uganda.

MU oversees the Women’s Development Centre, that is a holistic healing and educational boarding school for child mothers. These are adolescent girls who were abducted as children into the bush and forced to serve as child soldier “brides.”  Many times these “bush girls” are scorned and shunned by their tribe. Many wish they and the child soldiers would die, as they have been forced to live as animals and are deeply and traumatically damaged.

“During the armed conflict that ravaged northern Uganda for two decades, women became the first victims of war. Thousands have experienced violence through kidnapping, rape, sexual slavery, as well as forced marriage and pregnancies. Today, many of them are mothers and heads of families; most are left alone to take care of their homes.”said Youcef Hammache, Desk Officer, Action Against Hunger. He continued, “We’re aiming to reduce violence against women by increasing their economic opportunities and educating their communities. When we help women, we’re also helping to stimulate regional economic development. Women are the key to the future and to restoring regions ravaged by war. To reduce hunger in the 21st Century, we need to put women at the heart of our programs in Uganda and around the world.” (From The Diocese of Northern Uganda blog)

The teen girls are welcomed into this safe haven along with any children they may have. Drama, music, art and counseling are tools that help bring healing from years of violence. The Women Development Centre started in the 1980’s and since then it has trained over 500 young women in tailoring, secretarial, hairdressing as well as functional adult literacy. The young women are encouraged to work together—some are given sewing machines and seeds to grow a garden. They are encouraged and helped in starting village saving and lending circles. With support from the Danish Uganda Friendship Association the centre has given out over 120 sewing machines to former students. Some of the Alumni have made proper use of the sewing machines and are now able to support themselves and their families. They are finding healing and dignity in their new lives.

Mama Christine has been patiently and faithfully ministering to these fragile young ladies for many years. She and the Bishop are committed to the healthy future of girls in Uganda. She shares that in some African tribes, one is not considered to have a family without sons. However, her husband, The Bishop proudly touts his family of seven daughters—“In my country, girls are very delicate but in God’s economy they are the heart and strength of family.” Together, they are a strong force for good.

Christine brings the gifts of listening, forgiving, and nurturing tender self esteem. To heal, one must forgive. Let go, embrace each day, and seek God’s guidance in each present moment. The divine gift of forgiveness must be received for oneself as well as given to others for healing to begin and grow. She encourages them to study hard and stay in school; education is a key to their future.

When at home in Gulu, Christine also faithfully visits the nearby Father’s House village, home to 36 orphaned and abandoned children and the Mamas who care for them with the local parish church. She lavishes a mother’s love on the children and all who care for them. She also encourages their continued connection to their extended clan and tribe. Together, they are rebuilding the broken walls and lives of Northern Uganda. (Nehemiah)

In her family and beyond, they lovingly call her Mama. Her seven daughters, a living legacy, the fruit of her family, are the faces of virtue who rise up and call her blessed.

Thank you Mama Christine, your life is a testament to all daughters, sisters and mothers around the world.

Hope, Faith, Charity, Grace, Peace, Patience & Mercy be yours and bless you this Mother’s Day!

At GO Project, we are not pastors, but we really love them! We consider it a privilege to partner […]

In a world where people are often defined by what they are against, we at The Global Orphan Project […]

We had a very encouraging meeting with the local management committee at Hossana and the Kale Hewitt Church, and […]

Ready to love without boundaries 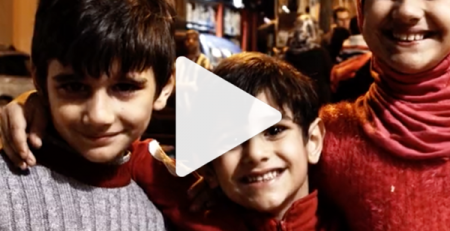 Travel to Lebanon with GO Project

Some Americans romanticize caring for orphans. Like a Christian version of The Nutcracker, visions of saving children dance in […]

Trace Thurlby, Live from Haiti
Can life change in six weeks? We know it can. Decisions become moments. […]