First off, a little history. Ethiopia is Africa’s oldest independent country and it’s second largest in terms of population. Apart from a five-year occupation by Mussolini’s Italy, it has never been colonized. Ethiopia has served as a symbol of African independence throughout the colonial period, and was a founder member of the United Nations and the African base for many international organizations.

It has a unique cultural heritage, being the home of the Ethiopian Orthodox Church – one of the oldest Christian churches. According to tradition, the Coptic Orthodox Church in Egypt was established by St. Mark, an Apostle and evangelist, in the middle of the first century (approximately 42 AD) during the reign of the Roman emperor Nero. Christianity spread throughout Egypt within a half century of St. Mark’s arrival in Alexandria. The earliest and best known reference to the introduction of Christianity in Ethiopia is in the New Testament (Acts 8:26-38) when Philip the Evangelist converted an Ethiopian court official in the first century AD. According to ancient church historians, the Apostle St. Matthew also preached the Christian Gospel to Ethiopia. By 341 AD, the majority of the kingdom was converted and Christianity was declared the official state religion. It is the only pre-colonial Christian Church in Sub-Saharan Africa. It has a very deep and rich heritage to be explored.

Kale Heywet (Word of Life) Church (KHC) is the largest evangelical denomination in Ethiopia. Started in the early 1920s by pioneering Serving In Mission, formerly, Sudan Interior Mission, (SIM) missionaries, Kale Heywet Church thrived in the South Central and South Western corners of the country during the five-year Italian occupation in the 1930s.

Dr. Thomas Alexander Lambie (1885-1954) is one of the prominent of early missionaries towards the establishment of the KHC. His entry and stay for some seven years and re-entry with a group of the first batch of SIM missionaries into the country, his fast friendship with the commoner as well as the high level officials, including the emperor himself, his brave commitment even to relinquish his birth citizenship to be an Ethiopian in order to get the right to buy and retain land titles and build mission stations with less bureaucracy, is a story in its own right. Articles such as this one and his books testify to his life and ministry. The few missionaries that entered the country had all to exit the country during the country’s invasion by the Italians. They left a handful of believers with the translation of portions of Scriptures and the Gospel of Mark. What the missionaries found when they came back after the five-year occupation of the country was astounding. The handful believers were multiplied by thousands and the fledgling congregation was very strong. The price of planting this church in Ethiopia was at a very great cost, even cost of the lives of three of the earliest missionaries. Nearly 100 missionaries toiled hard for about ten years before they left the country during the invasion. The Italians were not friendly to the Orthodox Church and treated the new Evangelical believers very harshly.

Changed lives were very evident among the converts. The congregations that grew in the absence of the church planting missionaries were not lacking anything. In fact, their unprecedented absence was a boon in a way as it gave birth to a church with an indigenous local texture. The devotion of the believers was pure and their worship biblical as well as culture-sensitive.

Kale Heywet Church grew and matured in its primal years not without persecution and challenges. The missionaries were limited in their effort to preach the good news. The nationals were tried and imprisoned. This body served as the voice of the Evangelical believers in Ethiopia for no less than three decades. Currently KHC has about or more than 7,774 local congregation and estimated 6.7 million members and adherents. (Wikipedia.org/Christianity in Ethiopia)

Enter in the family legacy of Koncko, Ethiopia KHC founder Pastor Bachore and his daughter

Over 60 years have passed and Zewudie Bachore now has 13 children who have a home and her heart forever. Zewudie’s story continues. I find myself bouncing along next to my new friend in the back of our rented Land Rover along bumpy roads and whip-lashing stops for herds of cows, goats, horses and mules. Zewudie’s eyes mist as she shares her family story. (see A Family Legacy: Ruined for the Average Africa)

Hers is one of two worlds, but her home Koncko, Ethiopia holds her heart. The backdrop of her personal story sets my heart for our visit to the church her Father built and those who have ministered all these years in his wake. I am humbled by the history and the legacy unfolding on this our first vision trip. GO Project is blessed to partner with KHC’s Father’s House in caring for an initial 13 children and hopeful prospect of many more to come as they grow in God’s grace. Upon our arrival we are greeted by the children and an afternoon futbol game!

It's more than OK to be a HOG

Dave & Jen Huebner got involved with The Global Orphan Project last fall at The BIG Event. Soon after, […]

Trips and baggage.  For trips to Haiti, our baggage is often filled with peanut butter, bed sheets, or medical […]

Community based on trust and acceptance

Hedges and walls are generally not considered loving structures.  Bridges, arches, and walkways, we like.  Six-foot, cinder block barricades? […]

Last week, CarePortal representatives from across the country gathered to celebrate, train and collaborate. Those in attendance participated in […]

Sewing up a storm in Kabale

The Kabale Sewing Center is up and running and sewing uniforms! Here is the latest update from Alison Barfoot…
The […]

On the Grid: Tier 2 – Walking with Children and Families

In 2015, the CarePortal network engaged to meet the physical needs of children and families in crisis. 2016 is […] 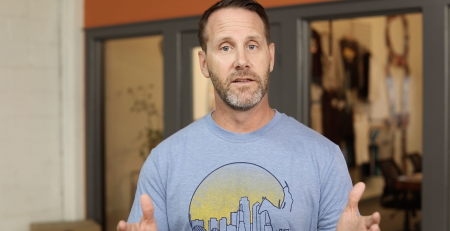 Joe has news for you!  Hear about five important things happening at The Global Orphan Project in under two […]